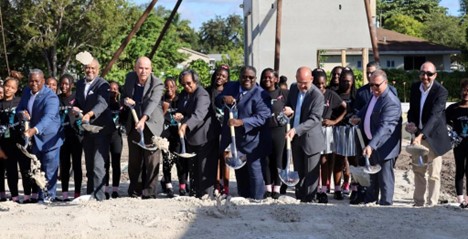 The school was named for Henry E.S. Reeve, the founder and publisher of The Miami Times, South Florida's African-American newspaper. It was converted into a K-8 three years ago and this building was designed to accommodate the estimated 300 students who make up the middle school 6th-8th grades.

“This will definitely be good for incoming generations of middle school students, a good opportunity to learn in a new building,” said Mekhi Wright, an eighth grader at the school.

Artists's endering of the new middle school building at Henry E.S.Reeves K-8 to be completed by the end of the school year.

The $15.2 million project, which was contracted to Thornton Construction Company Inc., will feature 465 new student workstations, including 13 new upper academy classrooms and administration offices. There will also be a computer lab, digital art studio, collaboration classroom, science classrooms/lab, basketball courts, locker rooms, dining shelter and parking. The project is expected to be completed by the end of this school year.

The school bond projects resulted from voter approval of the $1.2 billion General Obligation Bond in 2012. Funds from the bond are being used to modernize and construct school buildings throughout the District, expand student capacity, enhance facility safety, and provide technology upgrades at all schools.